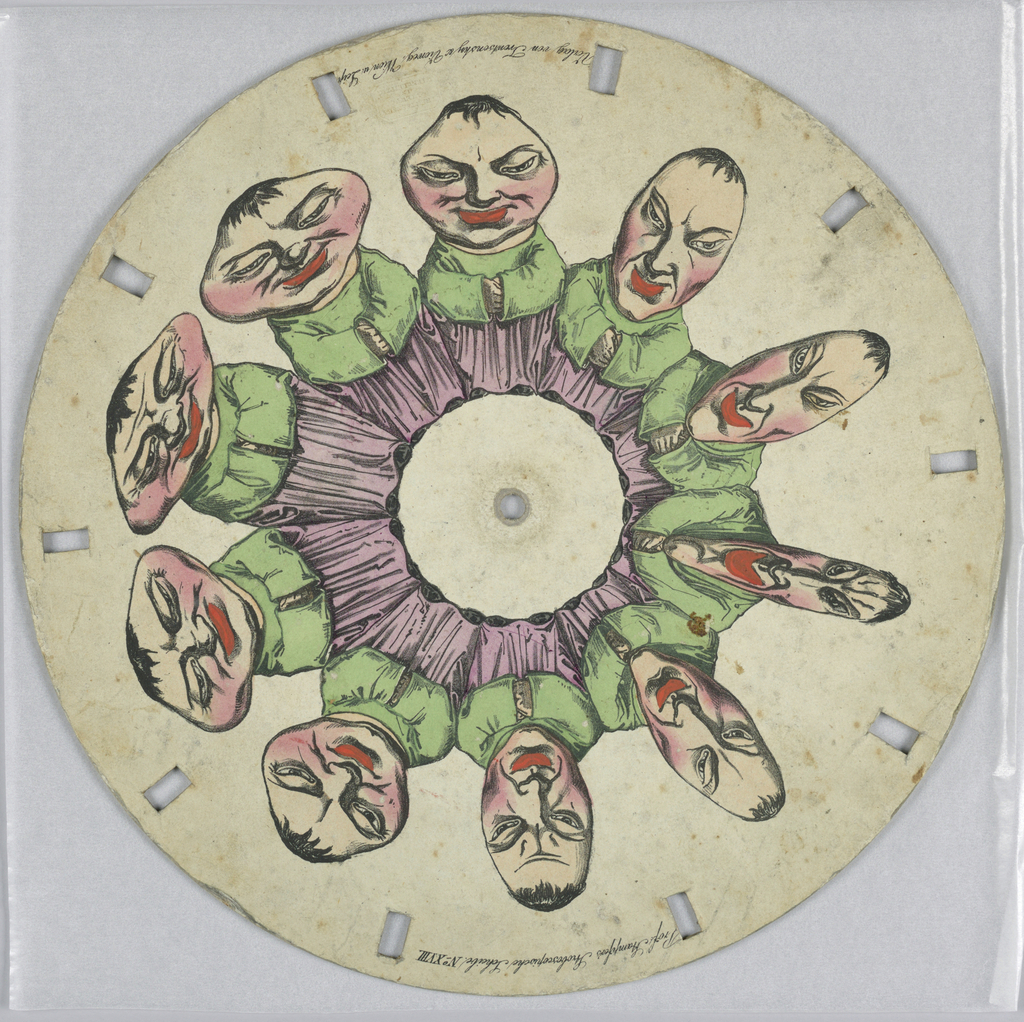 While fidget spinners are the latest trend in handheld amusements, spinning phenakistiscope discs such as the example shown here charmed 19th-century audiences. These discs were the first widespread devices that created an illusion of fluid motion. Before cinematography, adults and children alike were captivated by objects that combined art and optical illusion, and much of the content on phenakistiscope discs used the effects of animation to create amusing and fanciful scenes. When in use, the disc pictured here would show a loop of a male figure whose head is in a constant state of distortion, transforming from a thin elongated face to a broad one, with brief moments showing the figure in more natural proportions.

The tongue twister of the name “phenakistiscope” owes its origins to Greek roots and literally means “to deceive the eye.” This was the popular name for the optical amusements in France and Belgium, but optical inventors in other countries and distributors for other companies called the devices by a range of names so that they are sometimes known as “stroboscopes,” “phantasmascopes,” and “fantoscopes.”

Regardless of what they’re called, phenakistiscopes all operate in the same manner, using the physical principle of persistence of motion to create the appearance of animation. The hole at the disc’s center allowed it to be attached to a vertical handle shaped like a spindle. The device would then be held up to face a mirror and spun like a wheel. Peering through the rectangular slots on the back of the disc, the viewer would see the animation by looking at the reflected advancing images in the mirror. Like the individual pages of a flipbook, the small rectangular perforations limit the amount of time the eye can physically see the spinning images, which prevents them from simply blurring together. The number of rectangular slots varies based on the design of the disc, but it always corresponds to the number of still images that make up the animation. Other examples in Cooper Hewitt’s collection, pictured above, feature multiple animations so that different scenes could be viewed at the disc’s perimeter and center. After the success of the phenakistiscope, the zoetrope soon borrowed the principle to create strips of advancing images—the resulting animations could be viewed by many people at once.